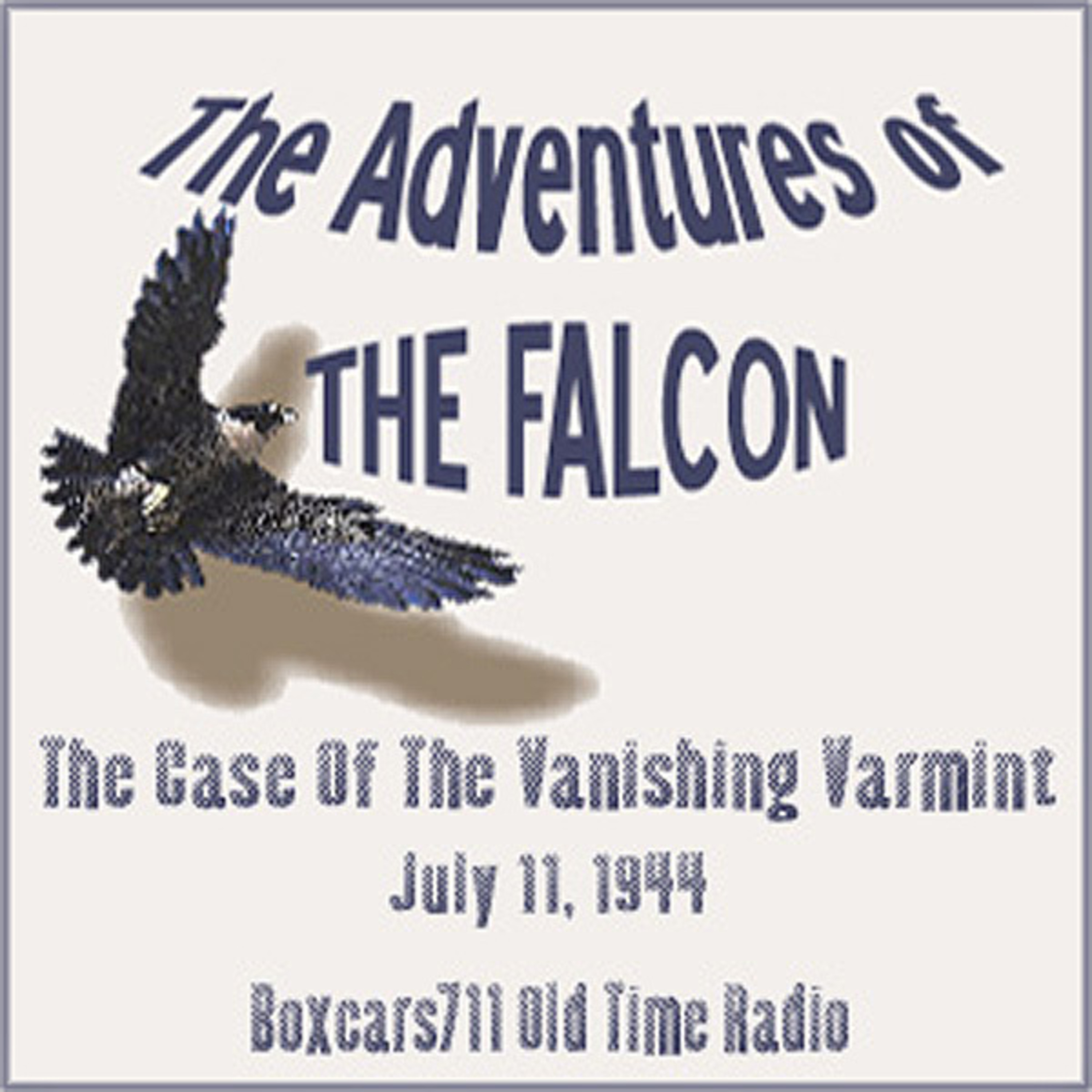 The Case Of The Vanishing Varmint (Aired July 11, 1944)
The success of Falcon films led to a radio series that premiered on the American Blue Network in April 1943, and aired for the next ten years on various networks. It was here that his transition into a private eye was finalized, with The Falcon, now called MICHAEL WARING working as a hardboiled insurance investigator, with an office and a secretary, Nancy. Barry Kroeger was the first radio voice of the Falcon, followed by James Meighan, Les Tremayne, George Petrie, and Les Damon. Nearly all the shows were broadcast from New York. Each show usually started out with a telephone call to The Falcon from a beautiful woman. Answering in his slightly British accent, he would reply to her and another adventure would follow. Waring was snappy and sarcastic with the incompetent police who were inevitably unable to solve the mysteries without his help. Like the films, the radio plots mixed danger, romance and comedy in equal parts.
THIS EPISODE:
July 11, 1944 - NBC network. "The Case Of The Vanishing Varmint". Sponsored by: Kraft Miracle Whip, Kraft Malted Milk. "Dead bodies, like bad pennies, always turn up!" Les Damon, Ed Herlihy (announcer), Drexel Drake (creator), Bernard L. Schubert (producer), Richard Lewis (director), Eugene Wang (writer), Arlo (music), Charles Webster. 29:54. Episode Notes From The Radio Gold Index.

1d ago1d ago
Subscribe
Unsubscribe
Bulanan+
The award-winning Story Pirates Podcast takes stories written by kids and turns them into sketch comedy and songs. Made up of talented comedians, songwriters, and frequent celebrity guests, the Story Pirates inspire kids to create, bringing laughter to kids and grownups of all ages with hilarious sketches, catchy original songs from all genres, and interviews with the creative geniuses behind the stories… kids!
T
The Drunken Peasants Podcast

14m ago14m ago
Subscribe
Unsubscribe
Mingguan+
This is the Drunken Peasants podcast. Bringing you the latest in news, entertainment, politics from an altered perspective.
F
Filip & Fredrik podcast

7d ago1w ago
Subscribe
Unsubscribe
Bulanan
Live from Denver, Colorado Eddie Jason & Chris is a weekly podcast delivering current events, hot topics and interviews with musicians and newsmakers. You never know what you'll get with EJC, but we can not confidently assure you that it will be entertaining. Get a weekly dose of EJC and subscribe now and leave a review! Join the show live on idobi Radio every Monday night at 8pm ET. www.idobi.com www.ejcshow.com www.facebook.com/EJCshow @EJCshow on Twitter
K
Kate, Tim and Joel

11m ago11m ago
Subscribe
Unsubscribe
Harian
Three of Australia's most respected personalities, Kate Ritchie, Tim Blackwell and Joel Creasey, come together to bring a conversational cheekiness to the drive shift. Joel Creasey joins Kate and Tim as the newest addition to Australia’s renowned drive show, with a combination of the day's hot topics, the best of digital and online and their unique benchmarks and games. Featuring the segments that Nova listeners have grown to love including Monday’s Mailbag, The Wednesday Wheel and the highl ...
S
Sideshow Sound Theatre┃Halloween Music & Film Soundtrack Podcast

15d ago2w ago
Subscribe
Unsubscribe
Bulanan
Barry first found music when he borrowed his sister's record collection when he was about eight and was hooked. When Caroline started it was a new beginning, and he listened to all the stations, but Caroline was his favourite by far. Later he became a singer in a band, then started doing discos when he was 18. He joined Caroline in 1977, touring the country with the Caroline Roadshow for 10 years, having great fun. Barry helped with tender trips and worked on the Ross Revenge in '84 and '85. ...
T
The Chris Moyles Show on Radio X Podcast

10m ago10m ago
Subscribe
Unsubscribe
Mingguan
You can hear The Chris Moyles Show on Radio X every morning from 6:30am to 10am on DAB Digital Radio across the UK, on 104.9FM in London, 97.7FM in Manchester, worldwide via the Radio X app or at www.radiox.co.uk
Dengarkan 500+ topik