Kevin Bersofsky from Montagne Russe Wines is our guest in the studio and Randy Bennett from Sojourn Cellars will be calling in later. Petaluma Gap is a fairly new appellation and it is becoming famous for quality wines, and for wines that are distinctive. The Petaluma Gap Winegrowers is promoting the Wind to Wine Festival on August 13, 2022. It will be a celebration of Petaluma Gap featuring 25 wineries from this new AVA. Many smaller growers and winemakers will be there and they will be sharing their stories. 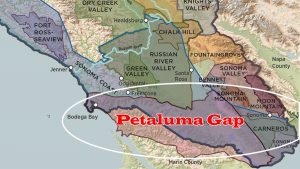 Despite our general warming, the Petaluma Gap area remains quite cool. The wind begins about Bodega bay and curls in all the way to San Pablo Bay. The wind comes in from the west and it blankets the gap. It is a cold region, and it needed to be carved out of the Sonoma Coast appellation. Dan emphasizes that the wind is the key feature that slows down the maturity of the vines. This allows the grapes to stay on the vines longer, for more flavor.

At the Wind to Wine Festival on August 13, there will be 25 of the greatest wineries in Sonoma County. There will also be an early hour VIP ticket with special pours and a chance to meet the winemaker. General admission begins at 2pm, VIP at 1pm.

Click the logo to visit our sponsor Bottle Barn online for the coolest bargains on wine, beer and spirits.

The Montagne Russe Chardonnays are rich but also have strong acidity, which is the holy grail of winemaking. The secret to the wine is the acidity, says Dan.

Click the logo to visit our sponsor Rodney Strong for the latest on the 2022 Summer Concert series.

Randy Bennett from Sojourn Cellars in the Petaluma Gap calls in on the phone. They have been producing wines in Petaluma Gap since 2004. It was a Pinot Noir and they still produce it. Then they started making a single-vineyard wine from Gap’s Crown, long before it became an official AVA.

The Sojourn Chard is young, so bright and fruity, and has not have time to develop complexity in barrel. It will do so, because it’s acidity is strong enough to reward you if you can put it away for 2 years. Two hours in a decanter will show you something of what aging will do.

14h ago14h ago
Subscribe
Unsubscribe
Bulanan+
A disappearing food franchise. The story behind how a Vietnamese spring roll ended up on the menu of Senegalese restaurants. We take America's Test Kitchen's inquisitive and relentless approach to telling unexpected, funny, and thought-provoking narratives about food and drink. This is not a recipe show. And this is not a show about celebrity chefs or what they like to eat. Proof plunges into history, culture, science, and the psyche to uncover the hidden backstories that feed your food-obse ...
T
The Food Programme

1d ago1d ago
Subscribe
Unsubscribe
Mingguan
The Food Chain examines the business, science and cultural significance of food, and what it takes to put food on your plate.
S
Scheer Intelligence

4d ago4d ago
Subscribe
Unsubscribe
Mingguan
Design Matters with Debbie Millman is one of the world’s very first podcasts. Broadcasting independently for over 15 years, the show is about how incredibly creative people design the arc of their lives.
i
iFanboy - Comic Books

21h ago21h ago
Subscribe
Unsubscribe
Mingguan+
The iFanboy.com Comic Book Podcast is a weekly talk show all about the best new current comic book releases. Lifelong friends, Conor Kilpatrick and Josh Flanagan talk about what they loved and (sometimes) hated in the current weekly books, from publishers like Marvel, DC, Image Comics, Dark Horse Comics, BOOM! Studios, IDW, Aftershock, Valiant, and more. The aim is to have a fun time, some laughs, but to also really understand what makes comic books work and what doesn’t, and trying to under ...
P
Picture This: Photography Podcast

8d ago1w ago
Subscribe
Unsubscribe
Bulanan+
UXPodcast™ is a twice-monthly digital design podcast - hosted by James Royal-Lawson and Per Axbom - sharing insights about business, technology, people and society since 2011. We want to push the boundaries of how user experience is perceived and boost your confidence in the work you do.
T
The Premium Pete Show

7d ago0w ago
Subscribe
Unsubscribe
Bulanan+
Early in his career, the renaissance man, Premium Pete pioneered the podcasting industry as co-host of the iconic hip-hop program, The Combat Jack Show. In addition to producing podcasts for several major brands such as State Farm, Foot Locker, and HBO. Premium Pete created his own outlet with The Premium Pete Show. Having a respected voice and being an influential entrepreneur, it only made sense for the goodfella to provide a platform for his guests to tell their stories. Internets! The Pr ...
Dengarkan 500+ topik