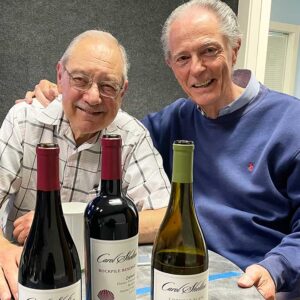 Steve Situm from Carol Shelton Wines is our guest today on California Wine Country with Steve Jaxon and Dan Berger. Steve Jaxon begins by reading the story from Carol Shelton’s website, about how her mother played a game with her where she had to identify spices by their scent. She has been making wine for forty-two years and was the winemaker for Rodney Strong who made all of their award-winning wines. Since she did not get the recognition that she thought she deserved, she started her own label under her own name. Carol Shelton has been on California Wine Country on this February 6, 2019 episode, and again on this other episode from July 22, 2020.

Steve Situm started in wine in 1962 as a salesperson, and he worked with many of the greatest labels in the business. He considers her to be the greatest winemaker he has ever worked with. Dan Berger says that Carol Shelton is also great at selecting vineyards. It takes years of analysis before she purchases a vineyard. Steve Situm has been in wine sales since the early 1960s. Carol Shelton wines are in 43 states and “the wine speaks for itself” when he is making a sales presentation.

Carol Shelton tells her story on her website about the resistance she encountered as a woman winemaker. Dan remembers that Carols was making wine in the mid and late 1970s and later, in the 1980s she showed a sixth sense for varietal character and personality in wine.

Click the logo to visit our sponsor Rodney Strong for the latest on the 2022 Summer Concert series.

\The 2021 Coquille Blanc Rhone-style blend is a good example of that. This has Grenache Blanc, Roussanne, Marsanne and Viogner, the four best of the Rhone varieties. Carol’s style is all about balance. She also uses no pesticides and organically farmed fruit.

Carol Shelton Wines tasting room is 3354-B Coffey Lane in Santa Rosa, in the Coffey Business Park. Reservations are required at the website or by calling (707) 575-3441. There is nothing like the wines that Carol Shelton makes.

Now they are tasting the Coquille Rouge, the other blend. Dan mentions that in the 1940s and 50s, the wines coming from this region were rather generic blends all called “Burgundy.” This blend is similar to those but it is more stylish in the way it represents the Rhone Valley in France. Some of these wines are from 100-year-old vines in Contra Costa County. There are 5 varieties in this blend, all barrel fermented in French oak. Dan says there is nothing like this coming from any winery, with a great bouquet and a silky finish. Steve mentions this is Carol Shelton’s signature style. It is also an incredible value, at about $26.

Click the logo to visit our sponsor Bottle Barn online for the coolest bargains on wine, beer and spirits.

Carol Shelton has more awards than any winemaker in the country. She has been awarded Winemaker of the Year eight times. Four of her wines have been in the Wine Spectator’s Top 100 in the last eight years.

The third wine tasted is a Rockpile reserve. The vineyard is gorgeous, says Dan. Carol Shelton recommended that the grower make some changes which had a great effect on the wine. The wine gets about 18 months in mostly French oak. It tastes more like a Cabernet than a Zinfandel, he thinks. This 2019 is as good as the 2018, which was the best Dan tasted that year. At well under $40 at Bottle Barn, it is a great value.

1d ago1d ago
Subscribe
Unsubscribe
Bulanan+
A disappearing food franchise. The story behind how a Vietnamese spring roll ended up on the menu of Senegalese restaurants. We take America's Test Kitchen's inquisitive and relentless approach to telling unexpected, funny, and thought-provoking narratives about food and drink. This is not a recipe show. And this is not a show about celebrity chefs or what they like to eat. Proof plunges into history, culture, science, and the psyche to uncover the hidden backstories that feed your food-obse ...
T
The Food Programme

2d ago2d ago
Subscribe
Unsubscribe
Mingguan
The Food Chain examines the business, science and cultural significance of food, and what it takes to put food on your plate.
S
Scheer Intelligence

4d ago4d ago
Subscribe
Unsubscribe
Mingguan
Design Matters with Debbie Millman is one of the world’s very first podcasts. Broadcasting independently for over 15 years, the show is about how incredibly creative people design the arc of their lives.
i
iFanboy - Comic Books

21h ago21h ago
Subscribe
Unsubscribe
Mingguan+
The iFanboy.com Comic Book Podcast is a weekly talk show all about the best new current comic book releases. Lifelong friends, Conor Kilpatrick and Josh Flanagan talk about what they loved and (sometimes) hated in the current weekly books, from publishers like Marvel, DC, Image Comics, Dark Horse Comics, BOOM! Studios, IDW, Aftershock, Valiant, and more. The aim is to have a fun time, some laughs, but to also really understand what makes comic books work and what doesn’t, and trying to under ...
P
Picture This: Photography Podcast

8d ago1w ago
Subscribe
Unsubscribe
Bulanan+
UXPodcast™ is a twice-monthly digital design podcast - hosted by James Royal-Lawson and Per Axbom - sharing insights about business, technology, people and society since 2011. We want to push the boundaries of how user experience is perceived and boost your confidence in the work you do.
T
The Premium Pete Show

7d ago1w ago
Subscribe
Unsubscribe
Bulanan+
Early in his career, the renaissance man, Premium Pete pioneered the podcasting industry as co-host of the iconic hip-hop program, The Combat Jack Show. In addition to producing podcasts for several major brands such as State Farm, Foot Locker, and HBO. Premium Pete created his own outlet with The Premium Pete Show. Having a respected voice and being an influential entrepreneur, it only made sense for the goodfella to provide a platform for his guests to tell their stories. Internets! The Pr ...
Dengarkan 500+ topik