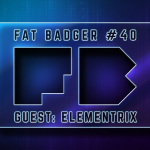 FB#40: Guest Mix - Elementrix
Welcome to the Fat Badger Podcast!
Up next we've got a special guest mix from @Warmearsmusic label owner and @bassdrive show host - Elementrix.
Elementrix aka Gabriel Cernea was raised and born in a city called Arad, in the western part of Romania. He began listening to Drum and Bass in the early 2000's and went on to developing a real passion for this genre. At the age of 19 he got himself an old pair of turntables, a mixer and some records and started practicing on his DJ skills. After a short period of time and mixes, he started getting gigs around the country, having the honour of sharing the stage with artists like: Logistics, Nu:Tone, Trei, Technimatic, Dave Owen, Submorphics, Calculon, Chris Su, B-Complex, BCee, Smooth, DJ Marky and many more. He's been influenced over the years by genres like Hip-Hop, Jazz, Lounge, UKG and Funk. He's sets contain mostly funky, jazzy, liquid, atmospheric vibes with a spice of rolling basslines that will make you footloose.
This year he launched a new label called Warm Ears Music. The label has already been getting lots of good press after a very successful launch party in the summer.
The third release on Warm Ears Music "Lost Moments EP" from @Re-adjust, forthcoming 24 October 2016, adds value to its versatility while bringing soulful vibes to the table.
You can catch him LIVE every Sunday from 1-3pm GMT on Bassdrive.com.
Show Elementrix some love here:
www.mixcloud.com/elementrix/
www.facebook.com/elementrixsound/
Follow Warm Ears here:
www.soundclound.com/warmearmusic
www.facebook.com/warmearsmusic/
You can also follow the podcast here:
www.facebook.com/fatbadgerpodcast
www.twitter.com/fatbadger_dnb

23d ago3w ago
Subscribe
Unsubscribe
Bulanan
Hospital Records’ award-winning podcast, hosted by Degs with the occasional guest takeovers from the Hospital roster. Bringing you the freshest music the drum & bass and jungle scene has to offer!
T
The Stress Factor Drum and Bass Podcast

1M ago4w ago
Subscribe
Unsubscribe
Bulanan
Barry first found music when he borrowed his sister's record collection when he was about eight and was hooked. When Caroline started it was a new beginning, and he listened to all the stations, but Caroline was his favourite by far. Later he became a singer in a band, then started doing discos when he was 18. He joined Caroline in 1977, touring the country with the Caroline Roadshow for 10 years, having great fun. Barry helped with tender trips and worked on the Ross Revenge in '84 and '85. ...
K
K-100 RADIO: MUSIC | TALK | EVENTS

1d ago1d ago
Subscribe
Unsubscribe
Bulanan+
K-100 Radio a music and talk radio broadcast based out of Atlanta, GA. We are a LIVE 24/7 broadcast, but we also use Blog Talk Radio to engage with our audience live on the air. Visit our main site at K100Radio.com to learn more and tune in. You can download our FREE mobile apps for Android and iPhone devices. We are also listed on Tunein Radio just search for us and follow the broadcast. Our talk segments and discussions include straight up no chaser conversations about Music, Social Issues ...
D
DnBRadio 24/7 - Main DnB Channel

11h ago11h ago
Subscribe
Unsubscribe
Harian
Updated in real-time. Fresh drum & bass, dnb, jungle, and bass-driven music - 24/7 - streamed live on dnbradio.com and recorded and provided via podcast format automatically on this feed. Like breakbeat? You will LOVE jungle!
T
The Eddie Trunk Podcast

2d ago2d ago
Subscribe
Unsubscribe
Mingguan
Eddie Trunk, the most well-known name in hard rock and metal music, brings his insight, commentary, reviews, discussion, and in-depth interviews to the podcast world! Join Eddie and his famous friends in rock and entertainment every week for a rollicking good time.
T
Too Much Rock

5d ago5d ago
Subscribe
Unsubscribe
Bulanan+
The Too Much Rock podcast is a 30-minute journey through the weekly music acquisitions of its creator. It may feature power pop, indie rock, post punk, indie pop, or any other named or unnamed genre.
t
the Millennial Throwback Machine

9d ago1w ago
Subscribe
Unsubscribe
Bulanan+
this podcast is going to be all about 60's music. the goal with this podcast is to educate a younger generation on one of the greatest decades of music of all time, and to prove to people that Millennials can love 60's music as well and it's not just for Baby boomers. Each week I"m going to review one song by one artist from the 60's and split the podcast into two halfs. first half is going to be my perspective and my opinion on the song and why I think it's so good or why I don't think it's ...
S
Salty Dog Blues N Roots Podcast